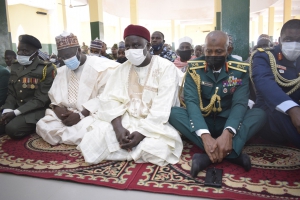 The Kaduna State Government joined the Nigerian Armed Forces to celebrates the Armed Forces Remembrance Day.
The Governor of Kaduna State Malam Nasiru Ahmad El-rufai appreciated the efforts and contributions made by the fallen heroes towards the development and unity of this country during their period of service.
This message was conveyed by the Honourable Commissioner Ministry for Local Government Affairs, Shehu Usman Muhammad PhD, who represented the Governor at Special Jumma’at Prayer Session in recognition of the fallen heroes at NDA Ribadu Jumma’at Mosque, Kaduna.